Becoming Muslim is based on Iman or Articles of Faith 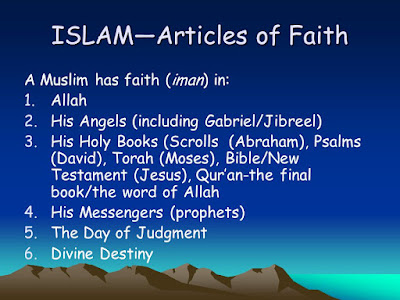 In the name of Allah, the Most Beneficent, the Most Merciful

This statement below makes you Muslim which is called the Shahadah ( it means to testify or to bear witness) if you articulate it with your tongue or express with your heart you become Muslim its that easy.

Also every Muslim is taught that the key to "Jannah" (Paradise) is the statement in Arabic:
"Laa e-laha ill-lal-lah"  (There is none worthy of worship except Allah.)

1. Islam: Islam means to Submit  or Surrender by declaring or making the Testimony of faith known or called the Shahadah: Ash-shadu anna Laa e-laha ill-lal-lah. Ash-shadu anna Muhammadar Rasoolulah.  by saying this are you a Muslim.

2. Iman: The Shahadah (or means to testify or to bear witness) is based on the 7 Articles of faith see below if you already believe these and  can accept Prophet Muhammad (peace be upon him) as the last messenger of Allah=The God (al=The ilah=God) then you already Muslim you just have to confirm it on your tongue with the  Shahadah.

The 7 Pillars of Iman, also known as the articles of faith, are a portion of the foundation in which a Muslim's beliefs stand on. These pillars are very important and hold heavy weight on the Day of Judgement. which is the statement below:

"I believe in Allah, in His Angels, His Scriptures, His Prophets, the Day of Judgement, and in the fact that every thing good or bad (in the world) is pre-destined by Allah the Exalted, and in the resurrection after death."

1. I believe in Allah,
2. His Angels,
3. His Scriptures,
4. His Prophets,
5. the Day of Judgement,
6. and in the fact that every thing good or bad (in the world) is pre-destined by Allah.
7. and in the resurrection after death."

3. Ihsan: meaning "perfection" or "excellence", Ihsan is the highest of the three levels of faith and the closest to God. It is to worship Allah as if you are seeing Him. While you do not see Him, He truly sees you. Then, Ihsan means that a Mu'hsen is sure that Allah is seeing him/her in everything he/she says or does. Therefore, a Muhsen does his/her best to say and do only what pleases God and conforms to His commands. This is the level of righteousness, the level of perfection, the level of doing and saying the ultimate good, the level of Ihsan.

The word "Ihsan" in Arabic is a derivative of the verb "ahsana," which means doing things better. Thus the literal linguistic meaning of I'hsan is doing the best, which is doing what God commanded us to do.

Pillars of Practice - Part 1 of 2 - By Hamza Yusuf
(Foundations of Islam Series: Session 2)

Pillars of Practice - Part 2 of 2 - By Hamza Yusuf
(Foundations of Islam Series: Session 2)

So Iman or "Article of Faith" in more detail
1. I believe in Allah,
2. His Angels,
3. His Scriptures,
4. His Prophets,
5. the Day of Judgement,
6. and in the fact that every thing good or bad (in the world) is pre-destined by Allah.
7. and in the resurrection after death."

The 7  Pillars of Iman, also known as the articles of faith, are a portion of the foundation in which a Muslim's beliefs stand on. These pillars are very important and hold heavy weight on the Day of Judgement.


Belief in Allah
The 1st pillar is the belief in the All-Powerful, Most Beneficent. Believing in Allah, above all else is the first and most important pillar. Its not only belief in Allah alone but in the way He is described through the Qu'ran and the sayings of Prophet Muhammad (peace be upon him). This includes all 99 names that describe Allah.


Belief in Al-Malaa'ika (The Angels)
The 2nd pillar of iman is the belief in Allah's angels. The angels are messengers of Allah. They are not his children as some may think. They were created from light and were created, before humans, for the purpose of worshipping Allah. They can also appear in the shape of a man if so ordered to do so. Some of the angels' names, that we know of, are Jibra'il (Gabriel), Mika'il (Michael), Israfil, and Malik. They have many jobs such as guardians, gatekeepers, and Trumpeters.

Belief in Al Kutub (The Divine Scriptures)
The 3rd pillar of iman is the belief in the books of Allah. Here it is the belief that at the time when these books were sent down they truly were a message from Allah. The only book left is the Qur'an in its entirety, because it is the last revelation Allah will send to us. There are four books known to man: The Torah sent with the Prophet Musa (Moses), the Psalms sent with the Prophet Dawud (David), the Gospel sent with Prophet Isa (Jesus) and the Qur'an sent with Prophet Muhammad. We as Muslims are to believe in all of these books and not just the Qur'an.

Belief in Ar Rasul (The Messengers)
The 4th pillar is the belief in Allah's Messengers. There are twenty-five (25) Prophets mentioned in the Qur'an. These Prophets are: Elishia, Job, David, Dhul-Kifl, Aron, Hud, Abraham, Enoch, Elias, Jesus, Isac, Ishmael, Lot, Moses, Noah, Salih, Shuaib, Solomon, Ezra, Jacob, John, Jonah, Joseph, Zachariya, Muhammad. It is said that there are numerous others leading up to 313. Muhammad is the last and final Prophet and there will be none after he. It is our duty as Muslims to send salaams(the Peace and Blessings of Allah) when mentioning the names of any of the Prophets. ( it says 125,000 prophets were sent in total)

Belief in Belief in (Yawmil Akhir) The Last Day or  The Day of Judgement
The 5th The most single certain and uncertain event in this world is related to the death, everyone certain that he or she will die one day but they are not certain when they will die.   It is a fundamental belief of a Muslim that one day this universe will perish on the day of  Jugement (Doomed day) when  Angel Isra'fil (Peace be on him) will blow the trumpet.  Its sound will be so frightening and intense that it's shock will kill every living thing and every material  will be shattered and destroyed.   That day all human beings and living souls Shall die; the entire universe will perish. Mountains will fly like cotton flakes, and the planets and stars etc. will disintegrate and fall down.   The Day of Judgement (Qiyamat) is about to come. But no one known  its exact time. except Allah.   Our Holy Prophet  Muhammad (Peace be on him) has foretold some signs of Qiyamat. By observing those signs, nearness of the Day of Judgement can be determined.

Belief in Al-Qadar (Pre-Ordainment or pre-destination)
The 6th pillar of faith is the belief in pre-ordainment (or pre-destination). What this means is that everything in our lives was already known by Allah before we were born. We are free to attempt to make good or bad deeds, but Allah knows in advance what we are going to do and has the power to determine what actually happens. Allah knows our past, present, and future.


Belief in Yawmil Qiyaamah ( Resurrection, Paradise & Hellfire)
The 7th pillar of faith in the belief in the Last Day. This is the Day of accounting for all deeds; evil or good, big or small. In our lives we need to believe that all we do will have bearing on the Last Day. No one but Allah knows when this day will come, so it is up to us to live each day as if it was our last.
Posted by test at 20:17